This is said to be the 1948 Tucker Convertible prototype, a car that had been developed and partially constructed when the ambitious automaker was shut down due to an SEC investigation. They were later acquitted on all charges.

Of the Tucker 48s that were built from leftover parts after Tucker went out of business, this car is the most controversial. There is evidence that is an original Tucker 48 convertible prototype, and there’s some evidence it was the first prototype of the Tucker 49, with a new wrap-around rear window.

The Tucker Torpedo was set to be the most revolutionary post-WWII production car in America. The Big Three automakers had been relatively slow to release all new models after the war but an ambitious and quick-thinking entrepreneur named Preston Tucker was hard at work to make them all obsolete. 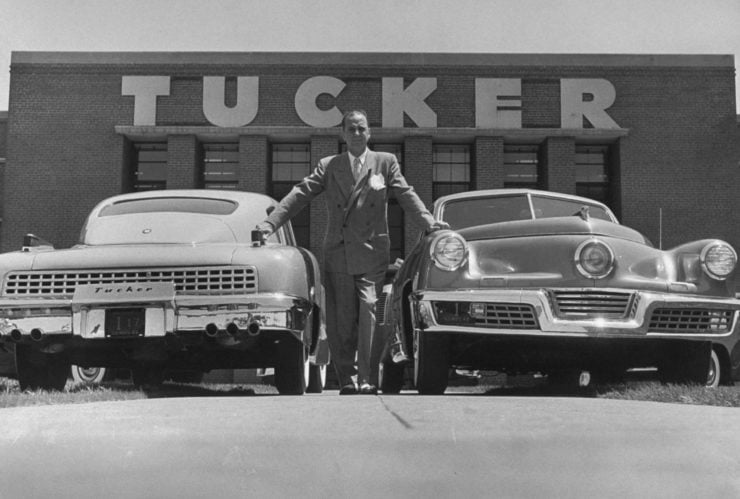 Preston Tucker defied the odds and took on the “Big Three” US automakers. He’s now recognized as a significant influence on automobile safety.

Preston Tucker was a man who had already led a full and fascinating life before he launched his own namesake automaker. He’d been born on a peppermint farm and became obsessed with automobiles at an early age – by the time he was 11 he had already learned to drive and by the age of 16 he was buying old cars, fixing them up, and selling them for a profit.

He worked for a time as an office boy for the Cadillac Motor Company, then later joined the police force at the age of 19 as he wanted access to their high speed cars and motorcycles. His plan was undone by his mother who exposed his true age – below the minimum for joining the force.

He would later rejoin (at a more suitable age) but would be fired shortly thereafter for cutting a hole in the dashboard of a cruiser to help warm the cabin in winter with engine heat.

By the age of 20 Tucker had taken over the lease of a gas station with his new wife Vera, he would work on the Ford Motor Company assembly line during the day and she would run the station. He would later experiment selling used Studebakers and this would lead to a very successful life as a car salesman. 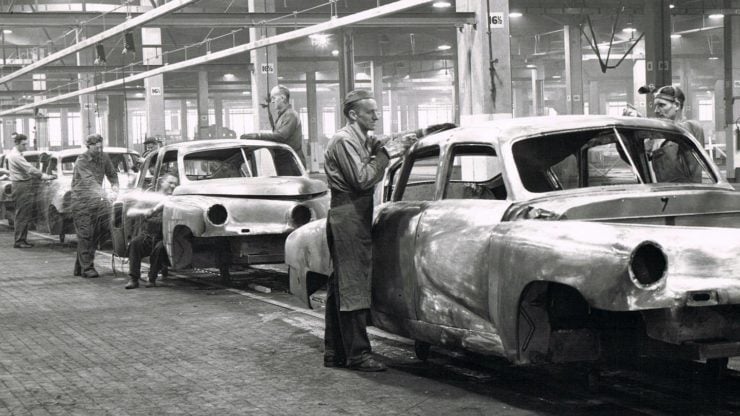 This undated image shows the Tucker factory floor. 36 cars were completed with an additional 15 made from left over parts. This convertible you see here would be number 16 and the 52nd car in total.

Being a longtime fan of motor racing Tucker fulfilled a dream in 1935 when he started a new business with racing car designer Harry Miller.

In the late 1930s with the impending storm of war descending over Europe Tucker turned his attentions to military vehicle design. He developed an advanced high-speed armored combat vehicle called the Tucker Combat Car, a vehicle with a rotating gun turret on the roof inside a clear perspex bubble that was called the Tucker Gun Turret.

After WWII Tucker turned his attentions back to automobiles, specifically to automobiles that were modern, advanced, and safe – the kind of cars the American people were clamoring for. 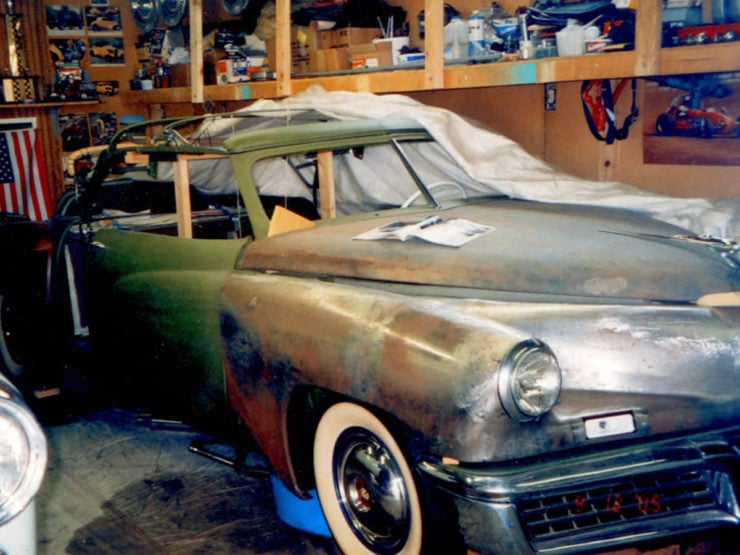 This is the still-incomplete car, it was built using original Tucker parts where ever possible.

With a small team he developed the Tucker Torpedo, later renamed the Tucker 48, as it was felt that the word “torpedo” was likely to dredge up negative feelings about the war.

Crowdfunding And The SEC

Never one to be bound by tradition, Preston Tucker sought new avenues of funding for his company. He had raised $17,000,000 in a stock issue that’s now recognized as one of the first speculative IPOs in history. He also sold dealership licenses across the country and perhaps most interestingly, he created the Tucker Accessories Program – a very early example of crowdfunding.

The Tucker Accessories Program allowed people to secure a spot on the lengthy Tucker waiting list by pre-purchasing items like seat covers, a radio, and bespoke luggage – before their car was built. It raised $2,000,000 but it’s one of the things that attracted unwanted attention from the SEC. 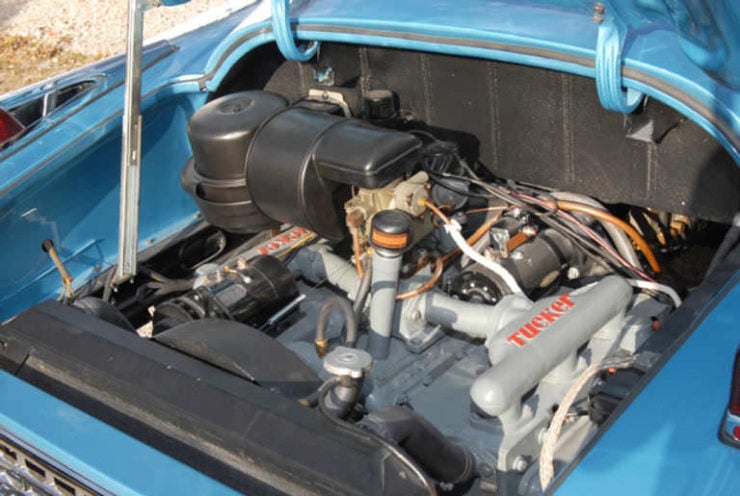 The Tucker engine was originally a helicopter engine destined for the Bell 47. It’s a flat-six with a displacement of 334 cubic inches (5.4 liters) and it produced 166 bhp with 372 lb ft of torque.

It’s been alleged in the years that followed that the SEC investigation was essentially an indirect targeted attack on Tucker by the Big Three US automakers. In the court case that followed Tucker would be acquitted on all charges, but the damage had been done and the company never recovered.

Preston Tucker set to work in the mid-1940s to develop, build, and sell a new four-door sedan that would be the safest and most advanced automobile in the United States, and possibly the world.

The development process was fast-paced but mired in difficulties, the company initially worked to develop their own engine before switching to a flat-six helicopter/aircraft engine to which they added a slew of changes including a liquid-cooling jacket.

A new transmission was designed, as was an all new body with a strong perimeter frame for crash safety, the central front headlight was designed to turn with the steering wheel to light the way around corners.

Additional safety features included a shatterproof windscreen that was designed to pop-out in an accident, a padded dashboard for impact reduction, a roll bar integrated into the roof, and a “crash chamber” under the dashboard to help protect passengers in the event of a crash. 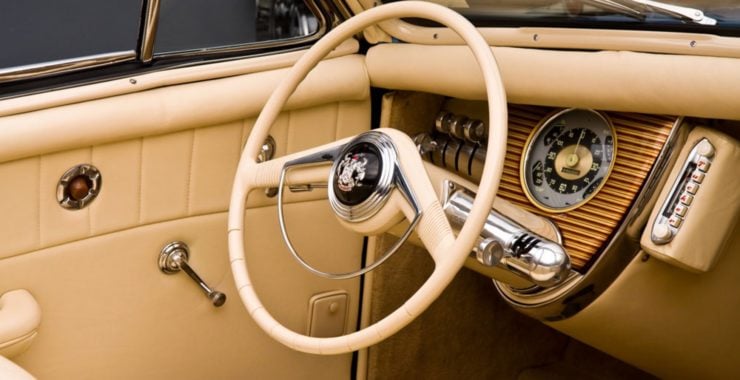 The interior of this car is beautifully appointed, having been finished to a very high standard by the team at Benchmark Classics.

With its rear-mounted flat-six engine keeping weight over the driven wheels, the Tucker 48 had good traction, it also had independent front and rear suspension which was an unusual (and advanced) feature for the time. As a result of the engine being in the rear, the 48 had a large front trunk which was accessed by a standard-looking hood.

In many respects the Tucker 48 was a revolutionary car. Parallels have been drawn between Tucker and more modern companies like Tesla that have appeared on the scene and disrupted the entire automotive industry. Even though Tuckers were never produced in volume many of the company’s innovations are now standard on almost all production cars.

The car you see here has been the subject of no small amount of controversy over the years. It started out as Tucker #1057, which remained unfinished after the Tucker factory shutdown. It was then assembled many years later using as many original Tucker parts as possible.

That’s the part that everyone seems able to agree on. 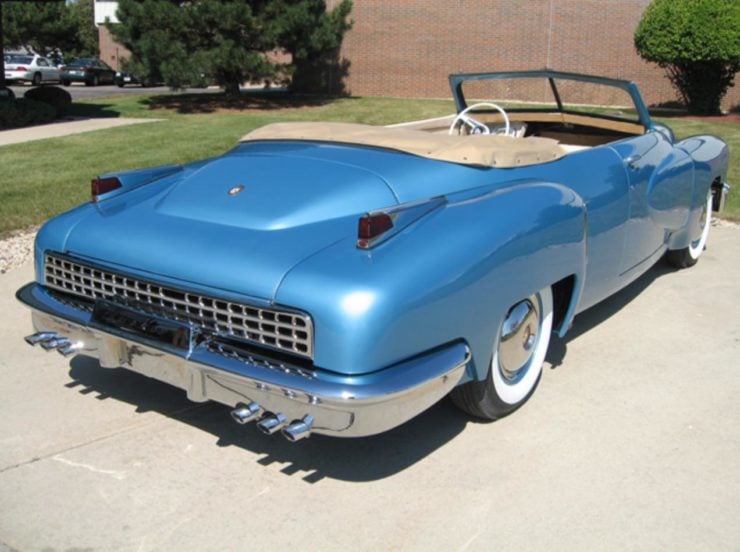 The Tucker 48’s engine is mounted in the rear to keep the weight over the driven wheels. The front hood now covers a large luggage bay.

There does seem to be some evidence to support both of these competing claims, which makes things all the more complicated. Jalopnik has a good breakdown on the controversy surrounding this car here.

Those who claim the car was being developed as the Tucker convertible say that the chassis was modified by Tucker engineers to add strength to compensate for the structural rigidity loss caused by removing the roof.

The other camp, those who claim the car was being developed at Tucker as the first prototype of the Tucker 49, have some evidence on their side. Photographs from the Tucker factory show that #1057 was being built with a “wrap around rear window” and a fixed roof as one of the 1949 model year design changes.

The collection of parts that made up this car remained unassembled for decades, it wasn’t actually completed until 2010 by Benchmark Classics in Middleton, Wisconsin – making it the last Tucker to be finished.

36 Tuckers are known to have been entirely built at the factory, the parts to complete many more were left over and as a result an additional 15 were built in subsequent years. This car would then be the 16th, making it the 52nd Tucker.

As the car remained unfinished in parts there may never be a full resolution of the controversy, which may be the reason that the car has remained for sale for a couple of years with an asking price of almost $2.5 million USD.

If you’d like to read more about this unusual Tucker you can visit the eBay listing here, it’s being sold out of Rowlett, Texas by Accelerate Auto Group and the current Buy It Now price is $2,495,000 USD. 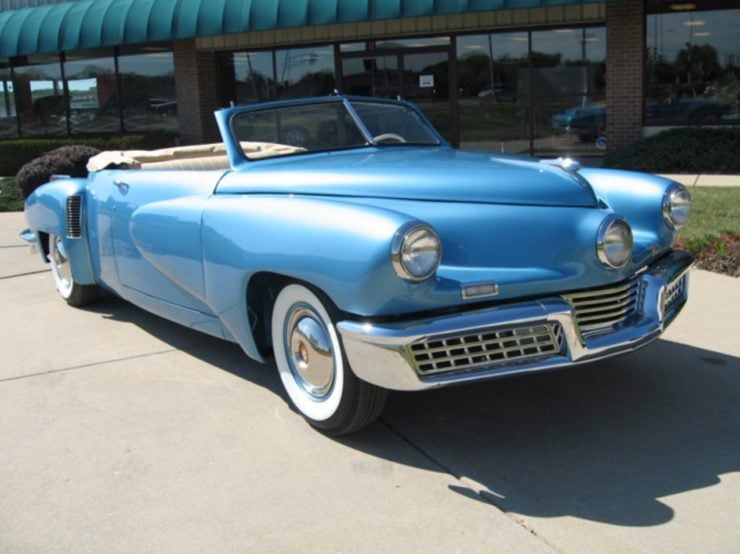 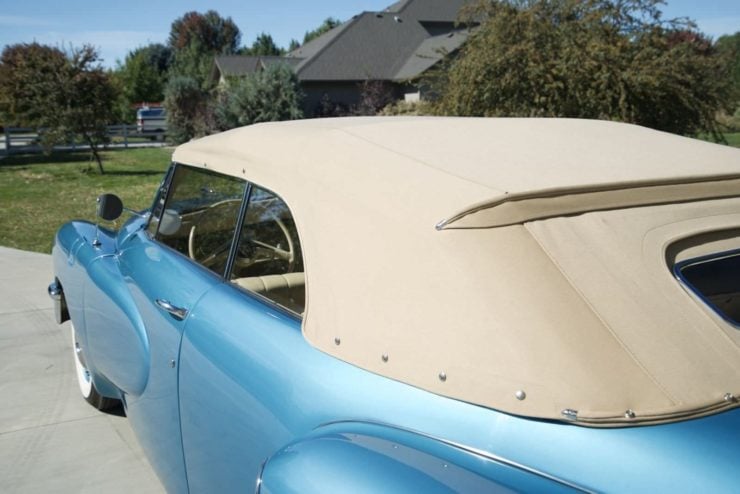 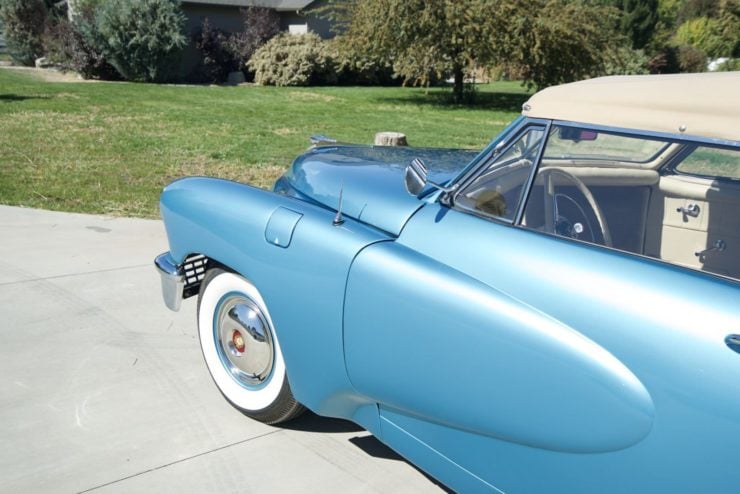 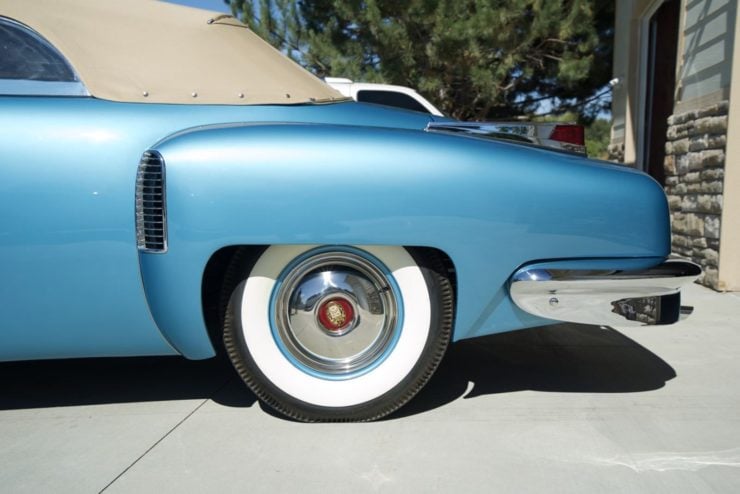 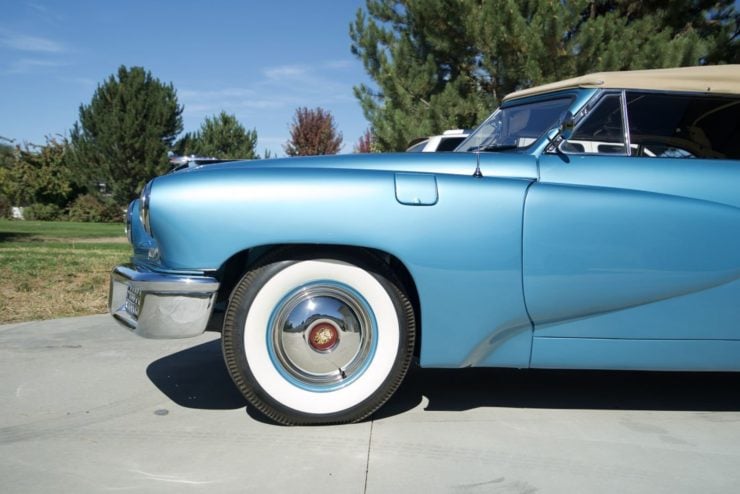 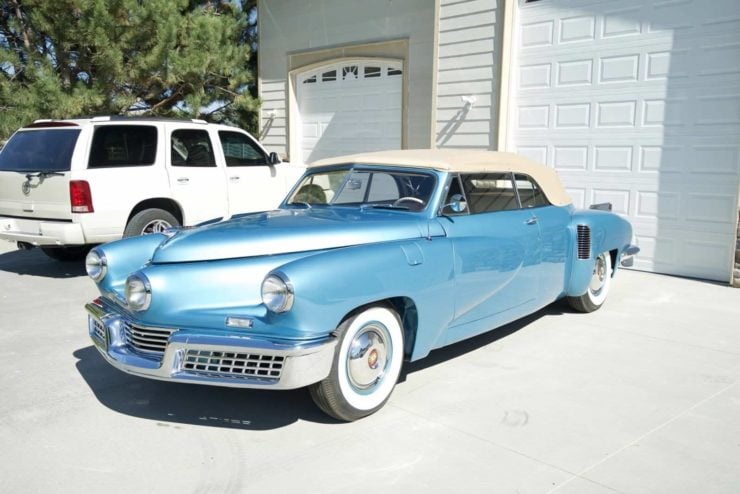 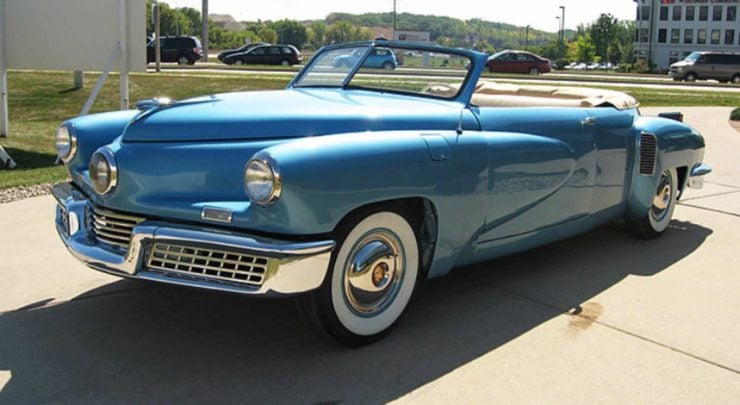 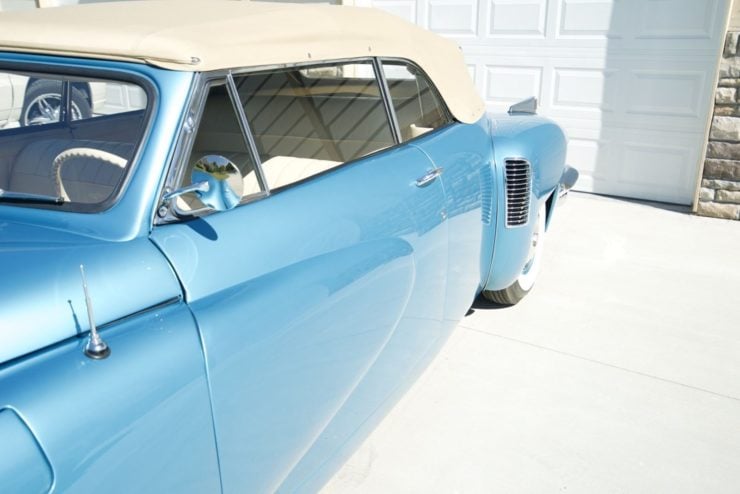 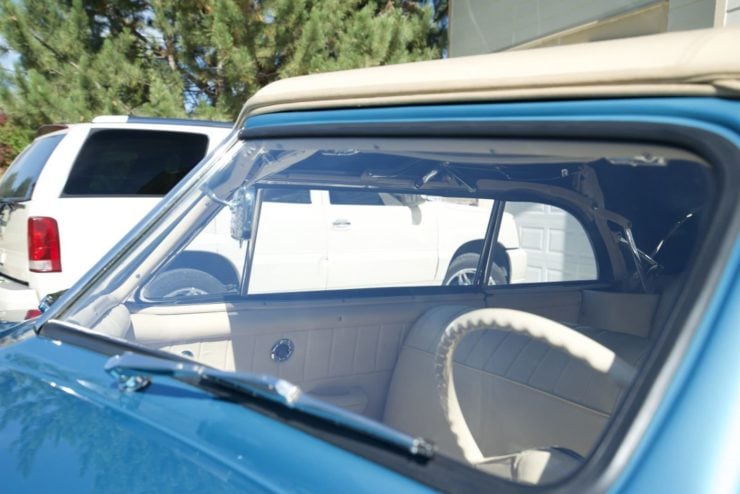 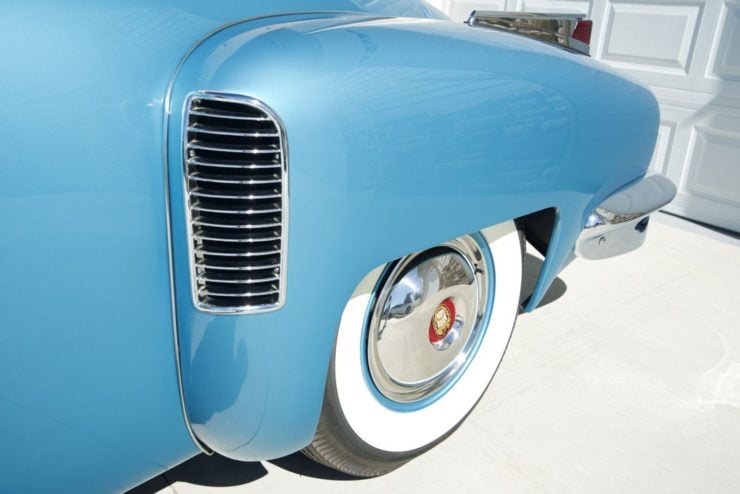